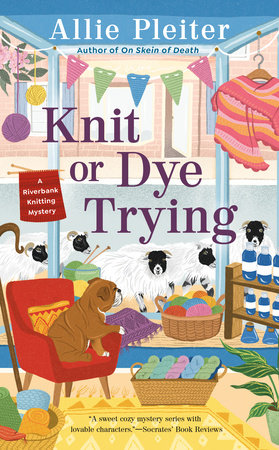 Purchased autographed copies from us!

Business is booming for Libby Beckett and her fabulous Maryland shop, aptly named Y.A.R.N., but when a town festival brings a fatality with it, Libby gets all tangled up in murder.

As spring comes to Collinstown, the village launches a food festival to draw a new group of tourists. Libby, proud owner of Y.A.R.N., has planned a yarn event to provide an alternative option to a foodie weekend. Artisan fiber dyer Julie Wilson—known for her work with animal-friendly, plant-based knitting fibers such as bamboo and hemp as well as her brilliant use of color—will hopefully draw a crowd with a special dyeing workshop.

The festival begins, but it draws more than crowds. First a flock of sheep parades down the street, herded by farmers protesting Julie’s antiwool stance. Then Julie’s celebrity chef sister appears, and the siblings resume a long-standing rivalry. Despite all this, Julie’s workshop has sold out. Libby is thrilled, and they’re preparing for a full house. But the night before the event, Julie is found alone in the warehouse event space—dead. The witty “Watch Julie Wilson Dye” workshop title now has a terrible new meaning—and it’s up to Libby to catch a crafty killer.